Houses for Sale in Clifton, NJ

Clifton is a very famous city in Passaic County, New Jersey. It is considered one of the most culturally diverse cities of the country. Clifton has features in many Hollywood movies and TV series such as Donny Brasco and The Sopranos. Apart from diversity, Clifton is also famous for its affordability and great connectivity features. Spread over an area of 11.4 sq miles, Clifton has a population of 85,578.

Clifton has a strategic location close to New York
Clifton is surrounded by wooded mountains on its west while Passaic River lies on its east. It lies just 10 miles to the west of New York City. Clifton is about a 20 minute ride to the Newark International Airport and about 15 minutes from the Metlife Stadium. Clifton is sandwiched between two industrial cities, Passaic and Paterson. Within itself Clifton also has many pockets of industry and agriculture.

Clifton has many little worlds living inside it
Clifton is not just culturally but also linguistically a very diverse city. More than 70 languages are spoken in homes of public school students. This ethnic diversity makes it a highly desirable place to live for many families. No matter what your ethnic roots are, you will find living in this amazing city easy and comfortable with ethnicities like Asian, Hispanic, Middle Eastern, Eastern European among others.

Variety of neighborhoods
Clifton is a city spread around Passaic River like a horseshoe magnet. It borders municipalities like Paterson, Bloomfield, Nutley, and Montclair. One important feature of Clifton is that it has not one but 5 Zip Codes. Also, the city is characterized by the presence of unique districts that have their own residential and commercial areas to be self sustained. These districts like Botany Village, Allwood, and Athenia have everything like public schools and parks to proudly refer to themselves as residents of a district rather than as a resident of Clifton.

Ample opportunities for outdoor fun
Clifton has more than 30 parks for fun and recreation of families It is known for its pop culture and lots of musical concerts organized here throughout the year. Main Memorial Park is the biggest and most popular park in the city. It is situated next to Clifton Stadium where huge fireworks event is organized as a part of 4th of July celebrations. Clifton is famous for its hot dogs. Rutt’s Hut serves some of the most delicious hot dogs, referred to as rippers by locals.

Affordable homes for buyers
Clifton is famous for its affordability. Median home prices here are $330,000 whereas median household income here is $71,830. Clifton real estate is characterized by the presence of all sorts of homes including condominiums and single-family homes. If you are interested in finding the perfect home in town and are looking for the best realtor in Clifton, feel free to reach out to us. We would be happy to answer any questions you have about the city and areas. We can provide you the help and guidance you'll need to buy the perfect home. We also have a lot of experience in foreclosures in Clifton.

Starter home on a double lot within the desired town of Clifton, NJ! First floor features an eat-in-kitchen, living room, bedroom, and full bathroom. Basement has an addi...

This house is more than meets the eye. Great curb appeal and luscious landscaping, this 3 bed, 2 bath gem located in Richfield section awaits its new owner. Bring your vi...

Welcome to one of the most sought-after neighborhoods in Clifton. Great Prime location on a desirable street. Personalize this 5 bedroom, 2 full bath cape cod to your wan...

Convenient Store Business for sale - .Well-established in a very convenient location, Including all of the inventory coolers - . - Busy location.All fixtures and equipmen...

Beautifully maintained second floor unit in the Montclair Heights section of Clifton. Updated and ready to move-in. This is a commuters delight steps to transportation to...

The data displayed relating to real estate for sale comes in part from the IDX Program of Garden State Multiple Listing Service, L.L.C. Real estate listings held by other brokerage firms are marked as IDX Listing.
The information being provided is for the consumers' personal, non-commercial use and may not be used for any purpose other than to identify prospective properties consumers may be interested in purchasing.
Information deemed reliable but not guaranteed.
Copyright 2022 Garden State Multiple Listing Service, L.L.C. All rights reserved.
Updated: 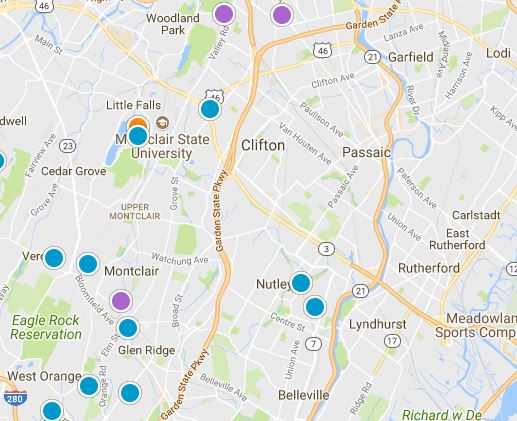